Dry herb and oil vaporizers are very popular and for good reason. 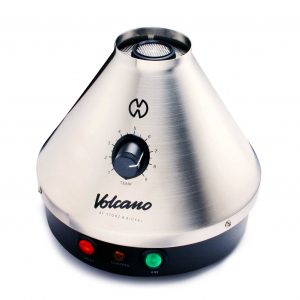 Compared to smoking a joint or bowl, vaporizers are alternative way to consume cannabis.

With a vaporizer, the cannabis is heated at a much lower temperature using a special heating coil, causing the cannabis to vaporize into a lighter vapor. Not only that, by avoiding combustion, the cannabis is cooked much more efficiently, meaning you get more from your weed using a dry herb vaporizer.

Now that recreational cannabis is finally legalized, people trying cannabis for the first time have a great device available to safely smoke their weed without needing to roll a joint. But what vaporizers are available and what’s the best to buy?

There are various types of vaporizers on the market, including handheld and desktop vaporizers. Handhelds are battery-operated vaporizers that offer the benefit of vaping on the go while being very discreet (useful for non-legal locations!), while desktops are much more powerful as they are plugged directly into a power source.

One desktop vaporizer has led the market for over a decade and remains the best all-round vaporizer available- the Volcano.

What is the Volcano Vaporizer?

Most cannabis users are familiar with the image of the Volcano. A distinct metal cone-shaped vaporizer with a large heating coil, the Volcano fills airbags with tasty cannabis vapor for a healthy and efficient way to consume your weed.

Although vaporizers are a relatively new trend in cannabis culture, the Volcano is almost 20 years old, with the original model released by German manufacturer Storz and Bickel back in 2000. Since then, they’ve only released one upgraded model, with the only difference being it adds digital controls over the manual controls on the original.

How the Volcano Vaporizer Works

The Volcano is a dry herb vaporizer that utilizes full hot air convection heating technology. It consists of a large cone-shaped body that sits on a desk and plugs into a power source.

You place ground cannabis on the large heating coil, adjust the temperature dial to your preferred settings, with temperature ranges from 40°C to 230°C. It’s worth mentioning that only the newer digital model (Volcano Digit) has temperature settings starting at 40°C, with the Classic Volcano starting at 130°C.

Different temperatures provide different consistency to the vapour. Those that love to smoke cannabis will like the highest settings, which produce thick and flavorful clouds of vapor, while users seeking a mellower high benefit form lower heat settings.

After placing cannabis onto the heating coil, you attach the patented Easy Valve Balloon to the Volcano. This large clear bag slowly inflates as it fills with vapour as the temperature rises, after which you simply remove the balloon and start taking a draw through the mouthpiece.

While Volcano Vaporizer looks fancy and gives you good enjoyment, it is surely more expensive and bulky in size if you were to roam around with it. Budderweeds offers ideal alternative to Volcano Vaporizer that are their THC Vape Pens and Pre-Rolled Joints. They will not hurt your pocket, they are discreet, and compact to carry around. Cherry on the top, Budderweeds members always get amazing deals on their each purchase. Sign up now and experience yourself. Use Budderweeds store locator and figure where you can buy premium dried-flowers, THC edibles and other cannabis products?