What are Terpenes and What do they do?

For many people, the word “terpene” is a strange and unfamiliar term, but it won’t be for much longer.

As science and technology carry us to better understandings of cannabis, we’re beginning to see that there’s a lot more to marijuana than its cannabinoid content. To get a hint of the other therapeutic compounds in your strain, just give it a sniff.

Terpenes are fragrant oils produced by a variety of plants, and often have a strong odor that may protect the plants that produce them by deterring herbivores and by attracting predators and parasites of herbivores.1

They give cannabis its aromatic diversity. Terpenes are what gives the flower its signature smells and shatter its unique flavors. These oils are secreted in the flower’s sticky resin glands, the same ones that produce THC, CBD, and other cannabinoids.

Over 100 different terpenes have been identified in the cannabis plant, and every strain tends toward a unique terpene type and composition. In other words, a strain like Cheese and its descendants will likely have a discernible cheese-like smell, and Blueberry offspring often inherit the smell of berries. 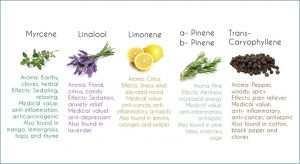 Like cannabinoids, terpenes bind to receptors in the brain and give rise to various effects. When choosing a strain based on its terpene content, keep in mind that different harvests may demonstrate dramatically different terpenoid profiles due to variances in growing and curing techniques.1

Lastly, when choosing your method of ingestion, keep in mind that the beneficial qualities of terpenes can be seriously damaged if heated past their boiling point. It is best to try a ‘low-heat’ device such as a Vaporizer pen to extract the full benefit and flavor of your terpenes.